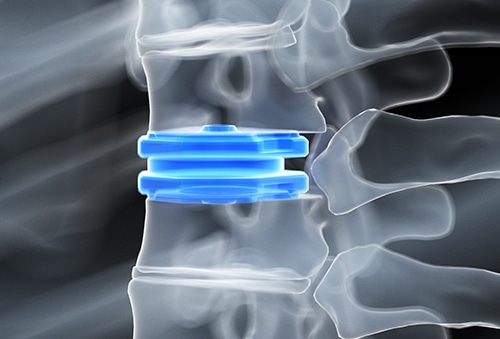 A disc replacement is done to replace an intervertebral disc when it can no longer function properly, due to a disc injury or a degenerative condition. The procedure involves the removal of a damaged disc and replacing it with an artificial disc device, preserving mobility in the spine. Artificial discs are designed with the goal of mimicking the form and function of the spine’s natural disc.

During the procedure, a small incision is made over the affected disc area from the front of the spine. The damaged disc is removed in order to relieve pressure on the spinal cord and nerve roots that are causing the pain, followed by implantation of the artificial disc. This disc fills the space between the two vertebrae. There is no fusion involved in a disc replacement.

Disc replacement surgery can relieve pain and restore full mobility faster and with fewer complications than more invasive procedures. In the past, disc conditions were often treated with a fusion, in which the damaged disc was removed and the two vertebrae were molded into one. Disc replacement surgery has the advantage of maintaining fuller motion in the spine due to the innovative design of artificial discs. This procedure is commonly used to treat a herniated disc, radiculopathy, or myelopathy.

Would you like to continue or select additional body parts?