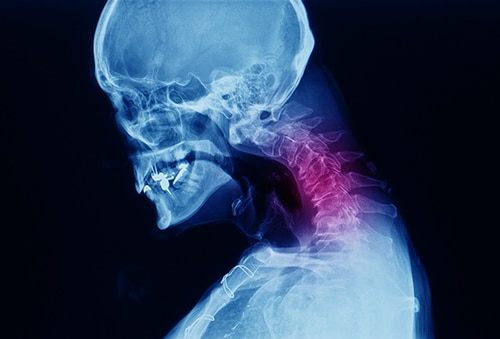 An anterior cervical discectomy and fusion is a type of surgery that involves removing a damaged disc to relieve spinal cord or nerve root pressure and alleviating corresponding pain, weakness, numbness, or tingling. The surgery has two parts:

During the procedure, a small incision is made over the treatment area. The damaged disc is removed to reduce pressure on the spinal cord or nerve root. Then, an implant is inserted to fill the space where the disc was removed. This implant acts as a support for the vertebrae while bone grows during the bone healing and fusion process. This segment of the spine will stabilize once the fusion occurs. Additional hardware like screws, rods, or plates are used as a stabilization device and to hold everything in place as the bones heal.

This procedure is done using an anterior approach, which means the surgery is done through the front of the neck as opposed through the back of the neck. This approach has several advantages:

Would you like to continue or select additional body parts?